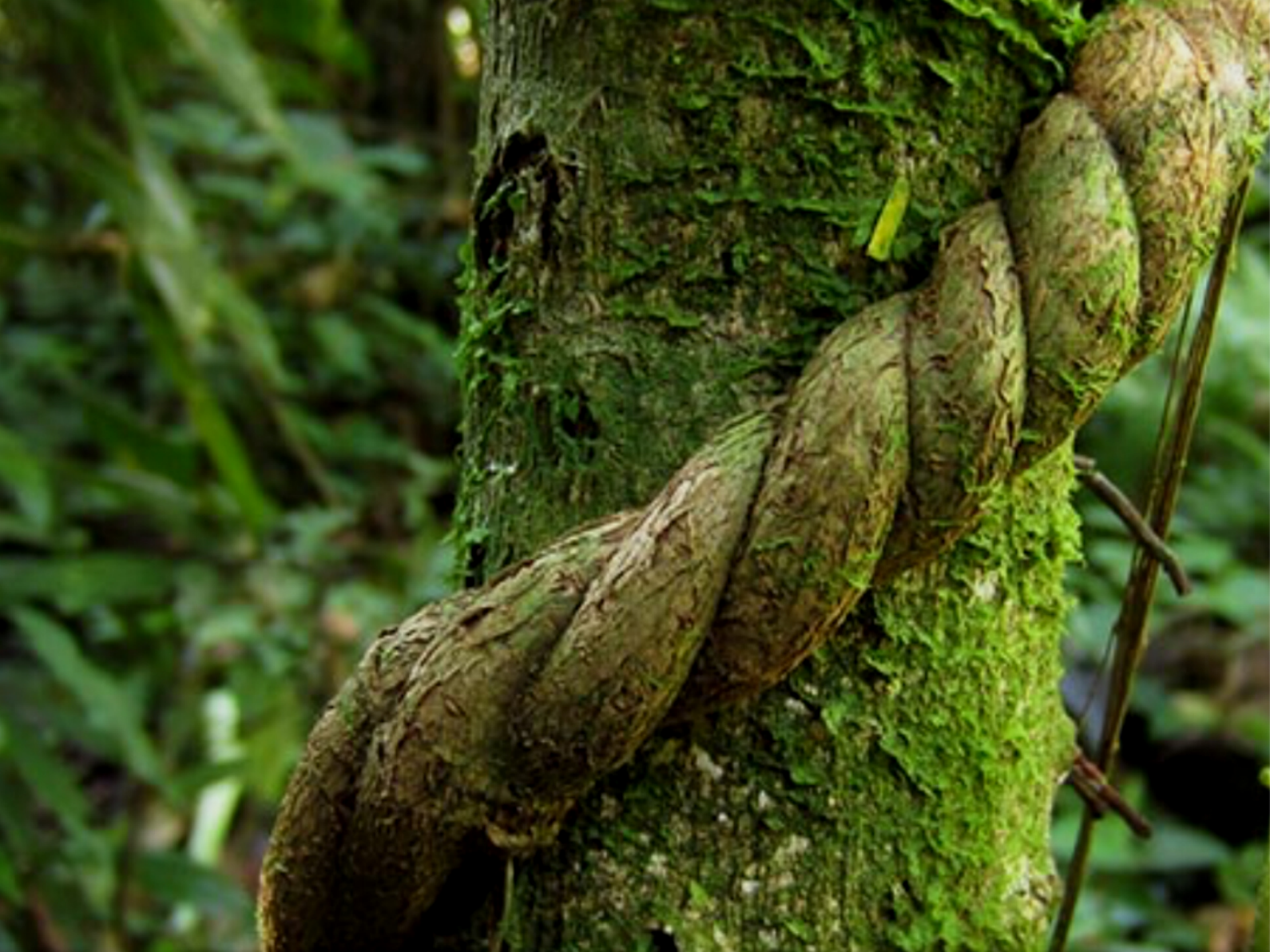 Ayahuasca is a medicine that has been used traditionally by indigenous cultures in the Amazon for likely thousands of years. Ayahuasca is made from two plants — the Ayahuasca vine (Banisteriopsis caapi) and the leaf of the chacruna plant (Psychotria viridis). Both plants are collected from the jungle to create a potent mixture that offers access to the realm of spirits and an energetic world that that we are typically unable to perceive in our ordinary state of consciousness.

In chemical terms, the leafy chacruna plant contains the powerful psychoactive dimethyletryptamine (DMT), which, by itself, is not orally active because it is metabolized by the stomach enzyme monoamine oxidase (MAO). However, certain chemicals within the ayahuasca vine contain MAO inhibitors in the form of harmine compounds that result in a psychoactive compound with an identical chemical makeup to the organic tryptamines in our brains. This mixture circulates through the bloodstream into the brain, where it triggers powerful visionary experiences and enables us to access otherworldly realms and our hidden, inner subconscious landscapes.

In recent years, increasing interest has been drawn to the remote Amazon rainforest. Sole repository of one-third of the world's plant and animal species, the Amazon has also been home to a great number of natural medicinal compounds, many of which have unfor tunately been lost to modern civilization with the relentless erosion of native cultures and traditional knowledge. Yet, one of the great mysteries of the Amazon has survived, and over the past few decades has become manifest to the outside world, ayahuasca.

Ayahuasca is a decoction, essence, of two plants native to the Amazon Forest, Banisteriopsis caapi and Psychotria viridis. When either plant is ingested by itself, it achieves no noticeable effect. However, when the two plants are brewed together for many hours, they induce an extraordinary several hour long visionary state. Prized by the native people as the Great Medicine of the Forest, and used for millennia for purposes of healing, divination and cultural cohesion, its use was forced underground by the arrival of the Spanish and Portuguese invaders during the 16th and 17th Centuries. Determined to eradi cate native cultures and force conversion of the native people to Christianity, the newly arrived Europeans identified the plethora of plant hallucinogens they found as tools of the Devil, and condemned their use to the harshest punishments of the Inquisition. While utili zation of these plants and the ancient traditions they were integral to remained extant, they could do so only in great secret, and often in disguised form. Indeed, it was not until the mid-20th Century, through the explorations of the great Harvard ethnobotanist, Richard Evans Schultes, that the existence of ayahuasca was revealed to the modern world.

Since the 1980s, the tools of modern laboratory science have been applied to unravel some of the mysteries of ayahuasca. Western scien tists, including ethnobotanist and pharmacologist Dennis McKenna, have determined that ayahuasca's psychoactivity is attributable to the biochemical interaction between the biologically active alkaloids in Banisteriopsis and Psychotria. While the powerful hallucinogenic alkaloid dimethyltryptamine (DMT) present in Psychotria is rapidly inactivated in the gut by the monoamine oxidase (MAO) enzyme system, when slowly brewed over many hours with Banisteriopsis, the monoamine oxidase inhibiting (MAOI) action of the harmala alkaloids in the Banisteriopsis deactivates enzymatic degradation and allows for absorption and central nervous system activation of the DMT. How the native peoples of the Amazon discovered this highly unusual interaction between these two plants is another mystery. Whether through some form of divine inspiration, as many have conjectured, or through the rigorous trial and error experimenta tion with the vast regional plant life over centuries before coming upon this remarkable and highly unique interaction, its origins will never be known. Yet the extraordinary effects ayahuasca is capable of inducing bring to mind the legendary cities of gold the conquistadors sought for in vain, never realizing that these tales of dazzling jewels and precious metals apparently were metaphors for the astonishing alterations of inner landscapes of consciousness brought about by these sacred, visionary plants.

While the knowledge and indeed the use of ayahuasca has spread in recent years to North America and Europe, as well as earlier in the 20th Century to urban Brazil where it has been utilized as a psychoactive sacrament in ceremony of modern syncretic religions, its core use has remained in the region of its origins, the lush, biologi cally diverse and remote Amazon Basin. To optimally understand the ancient traditions and belief systems from which ayahuasca emerged, it is necessary to examine its indigenous context.

While modern man and woman have often discounted and trivial ized the knowledge of native peoples, such hubris is shattered upon encountering the legendary visionary plants of the rain forest. Ayahuasca, while of inestimable value for many who have experi enced its effects, is not for the faint of heart. It calls for courage, inner strength and discipline. Maestro Enrrique emphasizes the need for La Dieta, strict sexual abstinence and prohibition of processed foods, salt, sugar, beef and pork, as well as alcohol, marijuana and many drugs.  And given the frequency of prescription drug use in modern times, particular caution may need to be taken with certain medications. One highly popular class of pharmaceuticals that represents a significant risk for adverse drug-ayahuasca interaction, is the SSRI (selective serotonin re-uptake inhibitor) antidepressants. Such a combina tion may induce a serotonin syndrome, a potentially serious medical condition. Disregarding the important dietary and behavioral prohibi tions understood by native peoples over centuries of use as essential for ensuring safety and optimizing outcome, or mindlessly combining modern pharmaceuticals with these powerful ancient plants, signifi cantly enhances the level of risk users may expose themselves to.

The implications of these ancient technologies to alter conscious ness and the knowledge learned from such inner explorations pose a challenge to modern science and culture. These "other-worldly" experiences, acquired from people we have customarily relegated to the role of "primitive", also offer us hope in a world suffused with danger. These are teaching plants, and the lineage of those versed in understanding their myriad effects are from the tribal peoples of the forest. That their secret knowledge and technologies are emerging into the modern world during this time of global peril is a blessing of inestimable proportion to humanity. With widespread environ mental devastation, staggering economic disparities, unceasing violent conflict throughout the world and frightening arsenals of conven tional and nuclear weaponry, the human race, along with all the species of the earth, stand on the brink of annihilation. During this time of peril, we have suddenly and unexpectedly found ourselves recipients of these ancient plant technologies, gifts from the earth designed to instruct humanity how it may save the planet. Indeed, as I once heard a wise man say, it is remarkable that by ingesting plants we learn to become more human.

In the ancient Quechua Indian language, the word ayahuasca is translated as "Vine of the Soul," or "Vine of the Dead". The ayahuasca experience offers us the opportunity to confront our own existential reality, and push us to the realization and appreciation that all life is both finite and eternal. By confronting our own symbolic death we experience profound healing, of self, relationship and community. Wise teachers, such as maestro Enrrique, have emerged to instruct us in how to respond to the ever-looming crisis to humanity. They are the linkage to the wisdom of our ancestors, who beseech us to wake up, open our eyes and begin the healing essential for there to be a future world inhabited by our descendents.